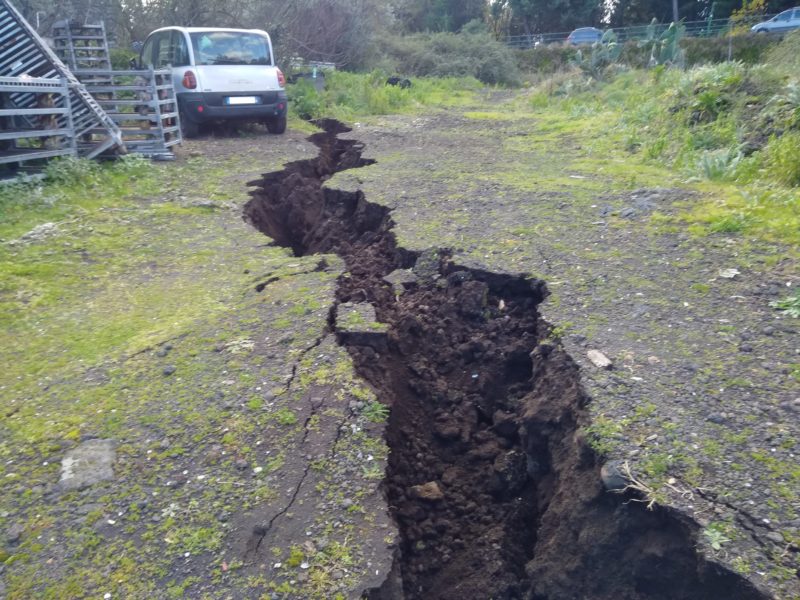 On December 26, 2018, at 3:19 AM (local time), a 4.8 magnitude earthquake struck the lower eastern flank of Mount Etna. The earthquake was the strongest in a period of intense seismic activity, and came two days later the beginning of a brief flank eruption begun on Dec. 24.

The earthquake caused an almost continue 7 km long ground rupture, marking a well-known fault segment called “Fiandaca fault”. The features of this ground fracture indicate a right-lateral displacement and a maximum fault slip of about 20 cm (here a map of the ground fracture).

The earthquake was likely triggered by the stress transfer due to the shallow magmatic intrusion in the upper eastern flank of the volcano edifice.

During 2018 the seismicity was mainly below Magnitude 3.5, but the earthquake frequency in the period from mid December 2018 to mid January 2019 is more intense, with four events with M>4 in few days (see graph). All the seismic events in the Etna area, from Jan 2018 to Feb. 2019, are plotted in the map and discriminated according to their depth (colours) and magnitude (circle dimension).

At present, the seismic activity is to the background level. Irregular explosive activity involves the summit craters with occasional emission of ash clouds especially from the north-east crater. 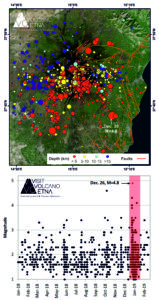