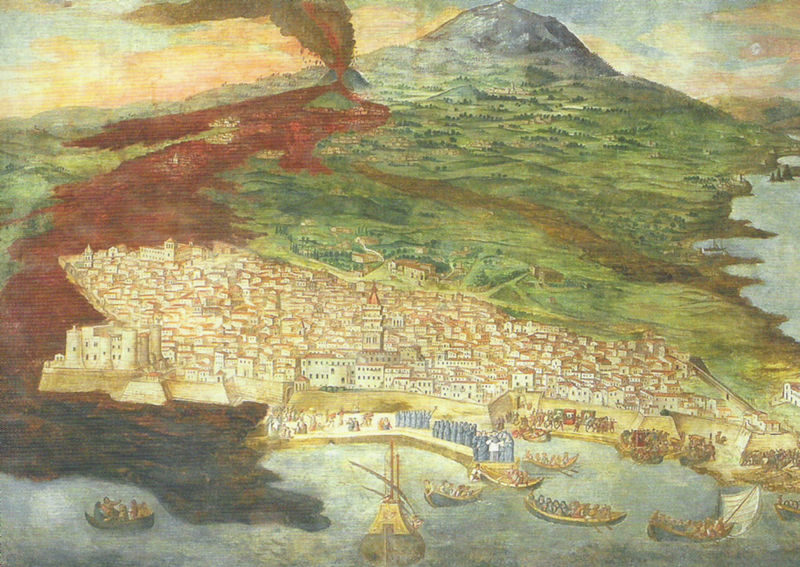 On March 11, 2019 will fall the 350th anniversary of the greatest eruption occurred at Mt. Etna in historic time. It was a flank eruption connected to the SE rift: explosive craters formed at about 800 m asl (today called “Monti Rossi”) and a lava flow spread southwards reaching the coast in correspondence of the city of Catania. Several villages were entirely destroyed and, at the end of the eruption, the land cover by lava was about 40 km2, included some new land offshore. The total erupted volume has been estimated in 607 million of m3 (0.61 km3) during the 120 days of the eruption. It gives the huge (for Etna) average emission rate of 58 m3/second. Considering the average size of the eruptions at Etna, the 1669 event was about 100 times greater!

The eruption had also a great impact on the society at that time; the city of Catania was then entirely destroyed after the 1693 earthquake.

The best spots where to observe today the 1669 lava flow are the “Monti Rossi” near Nicolosi, and several sites in the city center of Catania: the Ursino castle, the Benedettini monastery, and the cathedral where is hosted a beautiful fresco by G. Platania (photo cover) showing the scene of the eruption with high detail.

Satellite map of Etna and geological map showing the 1669 eruption.

Branca et al., (2015). Impacts of the 1669 eruption and the 1693 earthquakes on the Etna Region (Eastern Sicily, Italy): An example of recovery and response of a small area to extreme events. Journal of Volcanology and Geothermal Research, 303, 25-40.